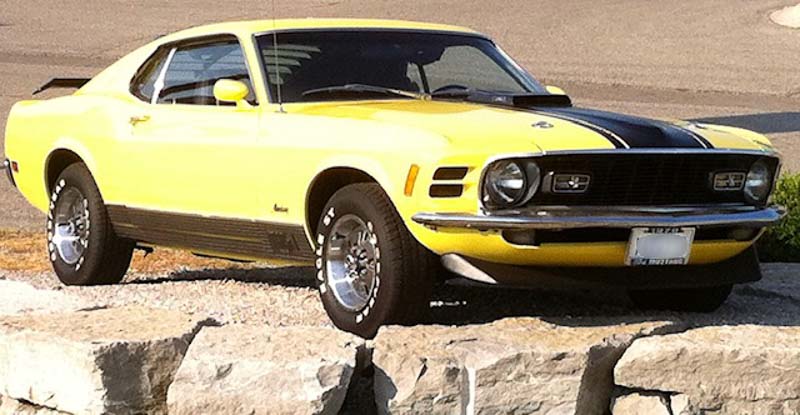 Owned by Patrick from Tillsonburg, ON.

Not many people can say they still have their very first car, but I am lucky enough to tell this story about mine.

In high school I was always doodling in class, drawing pictures of cars and the Cobra Jet snake emblem that Ford had on many of their vehicles in the late 60s and early 70s.

I graduated out of Grade 13 in 1971 and was due to go off to the University of Waterloo to study Engineering and I was going to need some wheels to get back and forth.

Early that summer a used car dealer in Tillsonburg, Central Motors (who were known to keep muscle cars on the lot), got in this awesome yellow ’70 Mach1 Sportsroof. I went there several times over the next few days studying it, before finally approaching my dad to see if he would help me purchase “the car of my dreams”.

He co-signed a loan for me at the bank and I bought the car for $3,140. I put it in my mom’s name (for insurance purposes), because that is what everybody did back then. It had a 351 C engine with an automatic transmission, with a shaker hood scoop, blinds on the rear window and front and rear spoilers. It had 13,000 miles on it and was formerly owned by a woman from Welland.

I was instantly the envy of all my friends when they saw me driving it or parked at the local drive-in restaurant, not to mention with the pretty little thing sitting in the passenger’s seat!

I went off to school that fall, but with “my wife to be” still back in high school and with the Mach 1 in the driveway, I had a hard time concentrating on my studies. In December I was able to convince my parents to allow me to change my career path and serve my electrical apprenticeship instead.

I was working out of town much of that winter, so actually away from the car, so my mom drove it to work.

By the time the summer of ’72 rolled I started drag racing the car and that also meant a couple of trips to the local dealership for some transmission warranty work….LOL!

In ’73 and for the next 18 months, I was stationed at my dad’s remote electrical shop in Vanastra. To endure the long cold nights up there I bought a new Yamaha GP 338 snowmobile. Of course I was home on weekends and wanted to snowmobile down south too. In those days we had one car and not the luxury of having a winter beater. So I had a guy help me rig up a trailer hitch for the bumper of the Mach 1 to tow my snowmobile trailer and of course I had snow tires on it too.

Come the finish of trade school each spring, the snows would come off and I put the wider tires and rims on it for the summer. Back in those days we also had “spot” safety checks in the summer months. I got pulled over and wrote up for the rear tires protruding out past the fenders. So I had a friend fab me a pair of custom fender flares that I painted and fastened them on in order to pass the re-test. (see pic attached)

Of course to ensure the tires wouldn’t scrub, I put a shackle kit on the car and eventually graduated to an air lift kit. I also added headers on the car and that got me down into the low 14s at the strip. I didn’t have Posi-Trac but I used an old pair of cheater slicks that I would install once I got to the track.

We mostly dragged at St. Thomas Dragway in Sparta, but also travelled to Cayuga and Georgetown to race.

In 1975 after I obtained my electrician’s ticket and Liz her nursing degree, we were married that September and the Mach 1 was decked out with flowers to be in the procession.

Much to my chagrin, some pranksters attending the wedding covered the car with flour and paste and confetti was strewn inside it, all while we were busy dancing and celebrating inside the hall.

We went to a friend’s garage that night, cleaned up the car and the following day we set off on our honeymoon to Florida. I kept getting confetti coming out of the air vents for months after!

While down in Fla., I purchased an even wider set of Mickey Thompsons (N50s) for the drive home.

The next year we decided we needed a larger and more reliable car in the family and we bought a brand new ’76 baby blue Cougar XR7 for $6,600 all in.

My mom who had been driving the Mach 1 periodically (and got attached to it), didn’t want to see me trade it in and since it was already in her name, it was an easy transaction for her to take it over.

That same year my father also convinced me to return to school to finish my engineering degree, so I enrolled in summer school to refresh and then in September I started at UWO in London. I drove back and forth daily, using a company owned station wagon. I had parked the Mach 1 in a friend’s pack barn in order to concentrate on school, start a family and also built a house while going to school.

After a couple of make ups at summer school, I managed to still graduate in May 1981.

I got the Mach 1 out of the barn that summer, rousted the mice out of it and I had a friend pull the motor and disassemble it as it had not been started in over four years.

It turned out to be seized anyway, but for $1,200 I managed to obtain a prepared block with a four bolt main from Atchison’s Machine Shop in London, who had built it up for some kid who couldn’t pay the bill on it.

I then had the car sandblasted and painted, so I practically had a new car again.

By this time the car had 90,000 + miles on it and I just drove it sparingly over the next several years. I had bought a tired 80’ Corvette and eventually dumped it for a 1994 Mustang Python Prototype (to be another story on the Zehr Insurance web site).

The guy that built the Python, Deryck Hickox, (also an Air Canada mechanic), took a look at the Mach 1 for me, but rather than freshen the paint at that time, he convinced me to replace the rear springs and some other suspension parts to give it a better ride. He also observed that the shock towers had deteriorated due to the excessive wet sand left all around them, likely from the early 80s body work?

In 2000 I bought a shop that was close to our home where I could properly store and work on the cars in a heated space. I also bought a 1988 Mustang LX 5.0 L hot rod with a J&P prepared 300 HP engine off a kid in Toronto. I eventually turned it into a drag car and got to go into the 12s with it. Then I purchased a rare 1986 white Cobra GT convertible with just 4000 km on it. I have since sold that car to my brother in law who cares for it better than I ever did and it is still all original and in showroom condition yet today.

Now it was time to turn to refurb the Mach 1 once again. After stripping it down that winter of ’01 in the spring it was loaded up and trailered to J&S Collision. They stripped it right down, replaced the shock towers and many of the body panels in order to get the varmint smell out of the metal. I wasn’t in a hurry for it, as I had other cars to drive so Jamie Tupper used it as a filler project for their shop. I got the car back in late April the following year and it took a couple of weeks for me to put it back together. That was a bit of a challenge as it was about 15 months since I had taken it all apart. Luckily I had saved all the old manifolds, etc. and put the car back to its original condition.

While the Mach 1 was gone from the shop, in June that year I took delivery of a new 2001 Bullitt that I ordered from my local dealer. It was one of 7500 made and just 500 that were imported into Canada.

As part of a local car dealership tradeshow, Stauffer Motors asked if I would lend them my car to put in their display, alongside the new 2003 Mach 1.

Other cars, have also graced my stable since are, an ’02 Corvette and then I upgraded with an ’09, along with adding a beautiful 2008 Vapour Silver Shelby GT 500.

In 2016 my daughter and son in law bought 44 acres on the south side of town. We consolidated my car storage with his farming needs and constructed a 6,000 SF shop with both Bendpak storage and work lifts to efficiently store my cars and those of others too.

Recently I bought a 2019 Bullitt, but none of my other cars have the memories generated by my very first car which turned 50 this year.

The newer cars are obviously easier to drive, smoother and faster, but none of them have the storied past of my Mach 1, that I am reminded of every time I pull back the cover. 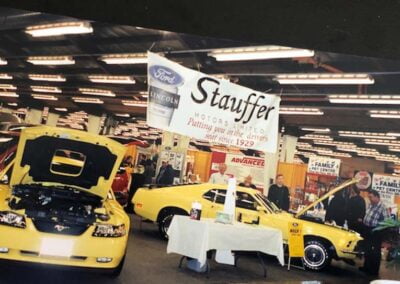 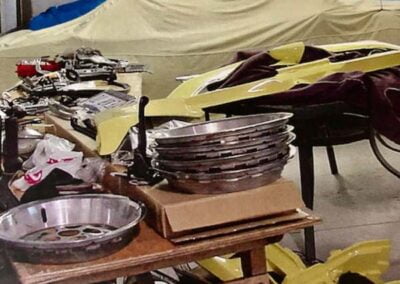 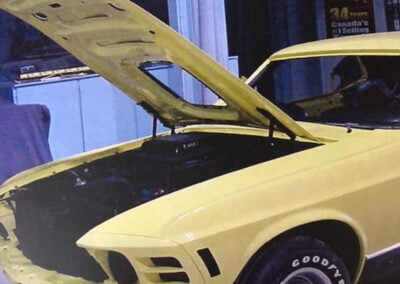 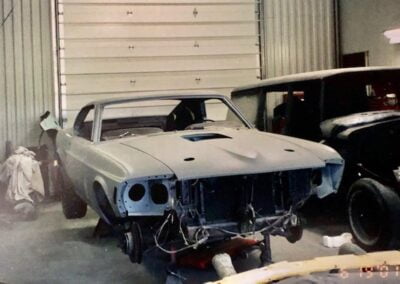 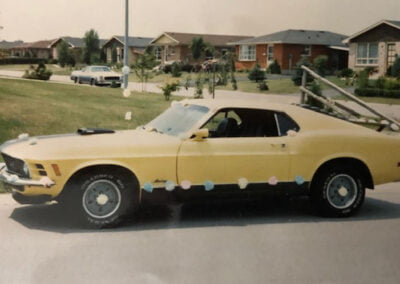 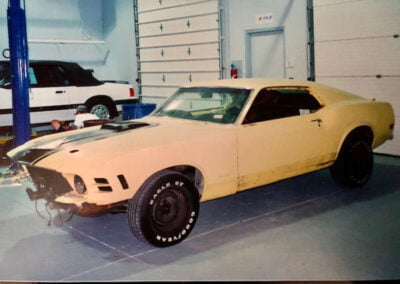 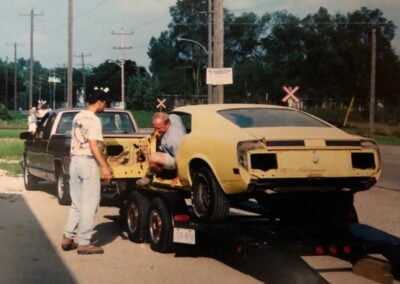 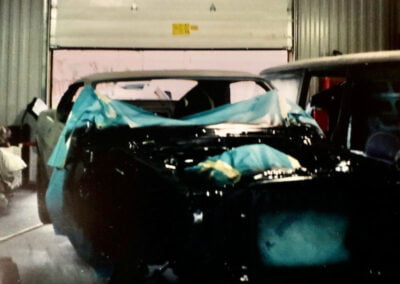 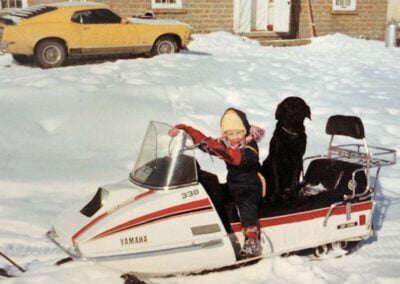 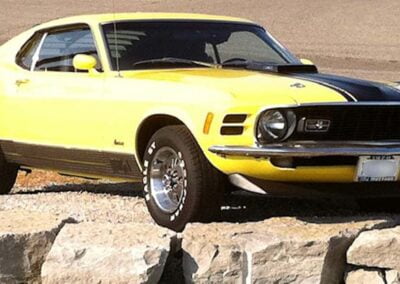 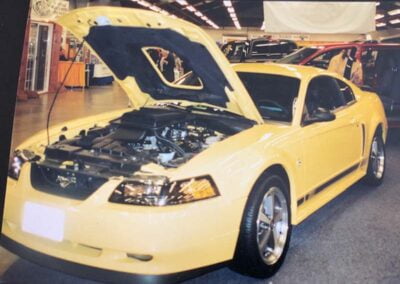 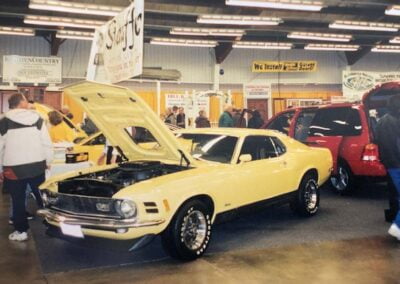 END_OF_DOCUMENT_TOKEN_TO_BE_REPLACED

END_OF_DOCUMENT_TOKEN_TO_BE_REPLACED
Featured car of the month